Our review on the HP Spectre Pro x360 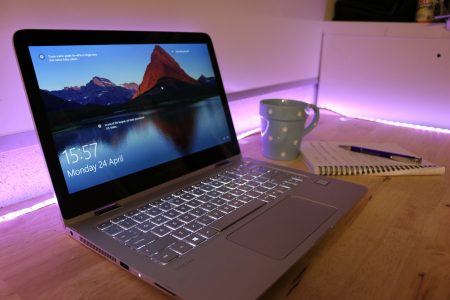 The HP Spectre Pro x360 is a phenomenal 2 in 1 convertible business laptop. It’s smooth, stylish and down-right sexy. I took on this beautiful machine for a week, trialling out every feature and factor of it to see if it is really as good as it looks.

There are two models of the Spectre Pro x360 that differ rather drastically in specs. The one we chose to look at had 8GB RAM, 256GB Storage on an SSD hard drive, a 6th gen Intel i7-6600U processor and a 56 wh lithium ion battery.
The battery was raved to last up to 12 hours, but after using it as my work laptop for the day, it only survived 6hrs 45mins. 4 hours in the battery was at 50%… by 20% the HP Spectre Pro x360 automatically turns on battery saver mode and by the 7 hour mark the battery had died already. It was put under pretty heavy, multi-program usage, however for a business laptop, especially one that boasts it portability, it needs to last at least 8 really.

The Spectre Pro x360 was released back in 2015 and still holds its head high as a fantastic and powerful business laptop. Its 360 function allows for 4 modes of use – laptop, tent, stand and tablet. The laptop function is obviously its most used and the reason people buy this product, but the other modes of use add something that little bit extra.

They’re not essential and I must admit weighing 1.4kg the tablet function seems redundant. It’s sleek, sharp edges are uncomfortable to hold and it’s simply too heavy to truly exploit this function. It hasn’t hindered any of the Spectre’s specs though, so I wouldn’t rate it down based on this alone.

The Spectre x360 features a 13.3 inch LED backlit, glossy touch screen and when trialling this function I found it to be speedy and responsive with absolutely no stall between touch and track pad control. The model we looked at had a resolution of 2560 x 1440 and colours really popped on screen.

We trialled it out with the window store games, as well as some other heavier games to see just how well it stood. The window store games ran smoothly and some were even touch screen operable. Playing Minecraft, Sims 4 and Runescape all also ran smoothly and colours really shone. When we tried out a heavier game such as Star Wars Battlefront however, the graphics looked incredible thanks to the Intel HD 520 graphics chips, but game play was slow and disjointed… it wasn’t particularly playable.

This being said HP at no point claim this device as a gaming laptop, so this is not only to be accepted but also very forgivable.

This machine is designed for business and with a Windows 10 Pro free upgrade, as well as a 30 day Office 365 trial, it certainly covers all margins.

I found the Spectre keyboard to be a dream. The keys were well spaced, light and quiet. Weird though HP have chosen to shrink the enter key, making way for an abnormally large hash key… perhaps a move with the increase in social media activity? Who knows… It was a strange choice that’s for sure.

Another amazing feature was the fans. When supporting heavy programs such as Adobe or playing a game the fans would kick in to cool the device down. However I couldn’t tell you at what point this happened. They fans are near unnoticeable. It took me a while to realise that’s what the noise was as it doesn’t sound nearly as loud or common to other fans.

The device also heated mainly in one place, making it fairly comfortable to sit on your lap, even whilst fans were in use. The centre back on the laptop, just below the screen held the majority of the overworking heat, which I was also rather impressed with.

Nothing slowed or halted during this time either. Programs ran smoothly as normal, the internet continued to load pages swiftly. Over all the speed of this device is fairly notable.

Another issue I did find was the track pad. It’s huge and that’s not even an exaggeration. When measured, it is the size of an iPhone 6s. A phone is the same size as this track pad… that’s not normal. I wouldn’t have had any particular issue with this, however the central alignment of left and right is quite off, quite annoyingly off. I found myself often left clicking when wanting to right click and having to actively check I was as far right as I could go to ensure I achieved this. It wasn’t quite to the point of only one space for the right mouse key, but it was probably at a 75/25 percentage.

The HP Spectre x360 is a beautiful and notably good device, but in all honesty it didn’t feel particularly special to me in usage. The extra modes are nice, but not particularly essential or completely thought out and as aforementioned the trackpad bothered me greatly. It is however a sleek, stylish, reliable laptop and for any business man or woman it’s a great device to consider.

Any technology lover or individual looking for something that little bit special, may want to look elsewhere as at £1,399 on Amazon, it’s not the cheapest of options.